This is a wiki page to organise food for the Seathwaite (Lake District) Vacation Trip from 3rd-8th January 2014. Given people are arriving and leaving on different dates, this is a bit more difficult to manage than for weekend trips, but if people want to try to organise group meals, then this is the place to do so.

High House has a good kitchen, including multiple hobs, oven, microwaves, fridge, the usual crockery, cutlery and utensils, and an on-demand water heater. The club will provide usual supplies of tea, coffee, hot chocolate, milk (for cereal and drinks, but not for cooking in large quantities), sugar, biscuits, cooking oil and washing-up stuff.

The people travelling in those cars leaving later will probably eat somewhere en route. If you're planning on being in the bunkhouse earlier in the evening, feel free to organise cooking anyway.

Given this is the busiest night in the bunkhouse (and kitchen), I suggest we all go to the pub this evening. The nearest pub is the Scafell Hotel in Rosthwaite. If you're likely to be interested, add your name below (or express any thoughts on changing to another night if you'd prefer!).

This meal is vegetarian.

I got some new recipe books for Christmas....

Hang on, I've got a good Ikea 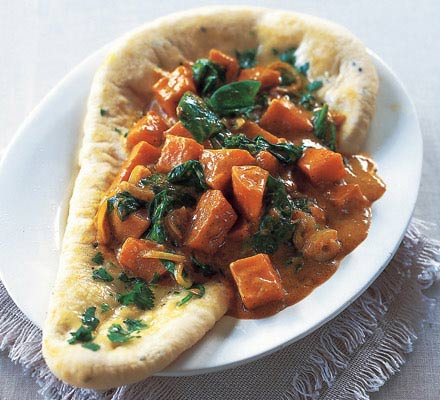 Main - Chicken curry on naan with a mint and yoghurt dressing